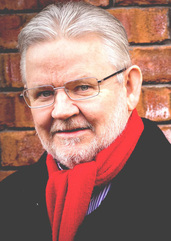 MYRA'S STORY Playwright, Brian Foster
Irish playwright Brian Foster “fell into” writing at age 39, despite coming from a tough background where visits to the theatre were unheard of and writing was a skill reserved for bookies and dockets. He left school at 16 with no qualifications except street smarts. Woven of truth and fiction, the hugely likeable, hugely vulnerable character Myra is an amalgam of several street drinkers Foster was familiar with in his home town of Derry, Northern Ireland.

Myra, says Foster, “is not an educated woman — but she has a street nurtured intelligence about her.” And Myra’s Story is merely a small window into the life of someone whom almost anyone could become.

“Street alcoholics are those who have stumbled over that line and (generally) can find no way back,” says Foster. “When I was researching the play a doctor pointed out to me that heavy street drinkers are terminally ill people. Their affliction will kill them in the end, yet we tend not to view them with the same compassion we would cancer sufferers, for instance.”

Foster, who re-wrote his original script, Maire: A Woman of Derry (2002), as Myra’s Story in 2009, is confident that Canadian audiences will embrace his character’s candid sense of humour and authenticity as delivered by actor Jennifer Cornish.

"I was looking for a very special someone with the ability not just to act Myra, but to physically and mentally become her for each performance,” says Foster. “I was delighted to find such a special person in Jennifer Cornish. A rare find indeed."